The Lake Biwa Canal carries Lake Biwa’s abundantly flowing water to Kyoto.The canal consists mainly of three parts: the “First Canal” (20 km) that runs from Kannonji, Otsu City, Shiga Prefecture to Horizume-cho, Fushimi Ward, Kyoto City;the “Second Canal” (7.4 km) that parallels the north of the First Canal all the way through a tunnel;and the “Branch Canal” (3.3km) that branches off from the Canal at a point near Keage (Sakyo Ward, Kyoto City) to Kita-Shirakawa.
Completed in the Meiji Era (1868-1912), “Lake Biwa Canal” is a man-made canal that is still in use today.

The “Canal of Hope” that connects Kyoto and Otsu

Kyoto was the capital of Japan for over 1,000 years since the establishment of the Heiankyo Capital in 794. After the Meiji Restoration (restoration of Imperial power in 1868) and accompanying relocation of the capital to Tokyo following, however, its population reduced to about two thirds of that of its prosperous period. People would say, “There will be more animals than persons in Kyoto.” But the people in Kyoto did not just lament the declination of the town. They turned to concentrating their hopes for the revitalization of the town coming from the construction of the Lake Biwa Canal that would connect Kyoto and Otsu―the “Canal of Hope.”

Kunimichi Kitagaki, who was elected the third Governor of Kyoto Prefecture in 1881, planned to build a canal from Lake Biwa and utilize hydraulic power to establish new businesses. He also planned to utilize the canal to increase goods traffic by boat.

The unprecedented, big project required an enormous construction cost which doubled the annual budget of the Kyoto Prefecture of the day. Talented young engineers, who had studied the latest technology and had up-to-date knowledge, were selected to conduct the construction. Sakuro Tanabe (then-21-years-old) was employed as the chief engineer. He had just graduated from the Imperial College of Engineering (present Faculty of Engineering at Tokyo University). Dosei Shimada (then-33-years-old), a surveyor who studied Western surveying methods and who already had a successful track record in the field, drew accurate survey maps. Construction began in 1885.

Persons engaged in the project

Prospectus for survey map for the canal through Lake Biwa in Oumi District in Shiga Prefecture to Kyoto
(Drawn by Dosei Shimada, April 1883)

Shimada conducted an accurate topographical survey in the areas between Otsu and Kyoto Cities. He drew this survey map using a trigonometrical survey method.

However, the construction was extremely difficult. All work was accomplished by human physical effort alone, including breaking hard rocks using dynamite, picking the ground with pickaxes, and carrying crushed rock and dirt using handbaskets. Inside the tunnel was lit only dimly by hand lanterns, and a steam pump was used to bail groundwater out of the tunnel.

There was a self-sufficient effort to prepare most of the materials. Training sessions for workers were held during the evening, so that they could use the learned techniques in the construction during the next day. The project was carried forward through extensive efforts.

A total of 4,000,000 workers were involved in the construction. The construction adapted various technical methods, including an excavation method utilizing shafts, a technique employed for the first time in Japan. The workers faced a lot of hardships, such as groundwater flowing out while drilling the tunnel. After overcoming these difficulties, the First Canal was completed in 1890, following five years of the challenging construction. In Japan in those days it was common that foreign engineers were employed to design and supervise the large-scale civil engineering works. The Lake Biwa Canal construction was the first modern civil engineering project that was completed by Japanese workers alone, from design through to execution.

The First Shaft and The Second Shaft

Tunnel excavation method utilizing shafts was employed for the first time in Japan. The shafts were drilled straight down from the mountain top to the depth where the tunnel was planned to be built. Drilling simultaneously into both sides of the mountain shortened the construction time.

Longitudinal section of the First Canal

The canal tunnels through the mountain and its water’s calculated flow winds gently around the mountainside.

The completion of the First Canal strongly led a depressed Kyoto into recovery. Walking along the canal, we can find a stone plaque at the entrance of each tunnel. Inscribed on these plaques are writing by great figures of the day. These writings tells us that the construction of the Lake Biwa Canal was a major project in Japan. 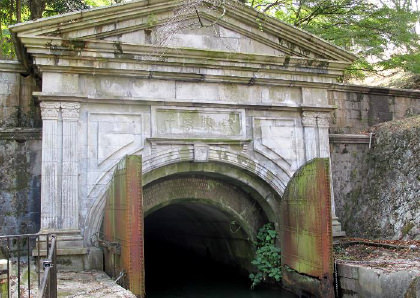 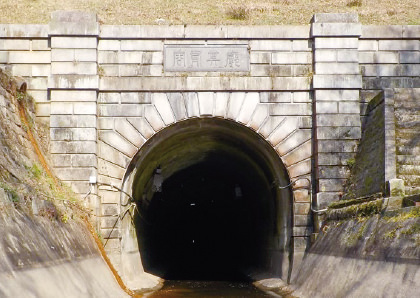 The water brought by the First Canal was utilized for many purposes, including power from water turbines, transportation by boat, irrigation, water for fire protection, and garden water. Among them, what made the biggest change in people’s lives was hydroelectric power generation, which was the most advanced technology at the time.

Initially, the Lake Biwa Canal was designed for utilization of the water turbine power. During construction, Sakuro Tanabe and a business person Bumpei Takagi went to the US to observe the use of water power. They were greatly inspired while inspecting a hydroelectric power plant in Aspen, Colorado. Tanabe earnestly persuaded the Governor Kitagaki, and the plan was changed in the middle of construction to cater for utilization of hydroelectric power generation. The Japan’s first hydroelectric power plant for utility services began operations in 1891 in Keage, Kyoto. The plant provided electricity to the city, providing power for electric lighting and machinery.

Demand for electricity continued to rise, promoting the development of the economy and industry in Kyoto. The improvement in industry resulted in development of engineering and science. Electric power was also adapted to medical procedures, as well as entertainment, contributing to the improvement of culture and the lives of the people.

Later, new power plants were built to increase the supply of electricity. The power plant built during the second construction period, which was completed in 1912, still remains at the location in Keage. The building shares a great achievement, which changed people’s lives in Kyoto and the destinies of following generations.

With the completion of the First Canal, which flows into Yodogawa River in Osaka, the transportation by boat from Otsu to Osaka via Kyoto was possible. This expanded the logistics by boat, for materials such as rice, charcoal, timber, and stone, and further developed the economy and industries in those areas.

Pleasure cruises for tourists also started operations, and the canal attracted many people as a sightseeing spot.

The water brought by the Lake Biwa Canal was used for fire prevention, protecting sites such as Kyoto Imperial Palace and Higashi-Honganji Temple. The Former Imperial Palace Water Pump Station, which was built next to the canal in Keage, was used to protect the Kyoto Imperial Palace. The building has a certain dignity that still fascinates tourists to this day (This is a government-designated tangible cultural property).

Canal water was also used to produce cultural landscapes in the Okazaki Area. Ogawa Jihei the Seventh, the best landscaper of the time, created many gardens that used canal water. These modern-style gardens were considered the best among the many gardens in Japan. One of Ogawa’s masterpiece gardens in Kyoto is the one created at Murin-an, a villa of the 3rd and 9th Prime Minister Aritomo Yamagata. The Murin-an Garden represents the modern-style Japanese gardens created in the Meiji Era. In addition, you can find Striped bitterling, fish designated as an endangered species, in the pond at Heian-Jingu Shrine gardens, as the pond water is drawn from the Lake Biwa through the canal. The fish are supposed to live in Lake Biwa, but recently it has become difficult to find them in the lake due to environmental changes.

Entering the 1890s, the flow rate of the First Canal had become insufficient to meet the increasing demand for electricity. Also, infectious diseases such as cholera and typhoid fever began to spread, as drinking water back in those days was obtained from groundwater. Advised by Sakuro Tanabe, the first mayor of Kyoto City Jinzaburo Naiki made a plan for the construction of the Second Canal.

Paralleling the north side of the First Canal from its starting point in Kannonji, Otsu City, the Second Canal had a flow rate of 15.3 cubic meters per second. The entire canal flowed through either, tunnels bored through mountain rock, or through concrete pipes buried underground. This was in order to protect the water from pollution and utilize it for the waterworks system.
The Second Canal, which is about 7.4 km long, joins the First Canal at Keage.

Persons engaged in the project

Expansion of the water system

When the water treatment system was established, the plant could supply water to only about 40,000 people in Kyoto City, out of total population of about 500,000. This was only 8% of the population. Later, the water treatment system was expanded to supply more water to deal with the increased number of users. Eight expansion works were constructed from the end of the Taisho Era (1912-1926) to the Heisei Era (1989-2019). Today, the system in Kyoto supplies water to more than 99% of the population.

The water and sewage system in Kyoto is built upon the legacy of the Lake Biwa Canal development. Still actively in use for 24 hours a day and 365 days a year, the waterworks protects the livelihoods of people in Kyoto, as well as supporting the economy, industry, and culture in Kyoto.

Keage Filtration Plant, the cradle of the waterworks system in Kyoto, is famous for its beautiful azalea. The site is open to the public every year during the azalea flowering season.

The Lake Biwa Canal is an industrial heritage that has been passed down through the history of modernization in Japan. Without the canal, Kyoto would not be what it is today. Still in use for water supply, power generation, irrigation, and industry, the Lake Biwa Canal is important urban infrastructure that supports numerous urban activities in Kyoto.

The Lake Biwa Canal Museum is located by the Nanzenji Boat Reservoir. Exhibited at the museum are materials used in the canal construction and physical items actually used for the construction. Here you can enjoy learning about the history and functions of the canal.

In 1996, twelve sites related to the First Canal were each designated as a National Historic Site. In 2007, the following sites were designated as Heritage of Industrial Modernization by the Ministry of Economy, Trade and Industry: the Lake Biwa Canal, collections of the Lake Biwa Canal Museum, Suirokaku (aqueduct bridge) in Nanzenji Temple precincts, Keage Incline, Keage Filtration Plant, and Keage Power Plant.

In June 2020, the Lake Biwa Canal was designated as part of Japan Heritage, entitled: “The Lake Biwa Canal: The Canal of Hope Connecting Kyoto and Otsu―Walk and boat along the canal to experience a day in the Meiji Era”

The Lake Biwa Canal led Kyoto to revitalization and even more advancement, enabling Kyoto to become what it is today. The canal still connects Kyoto and Otsu, and enriches the lives of the people in these modern times as it has in the past. Wishing for the revitalization of the city, our predecessors in the Meiji Era established the canal while facing and overcoming great adversity. Traveling along the calm stream on a The Lake Biwa Canal Cruise, or walking along the canal side while enjoying the views in different seasons and visiting related facilities, you can rest assured that the great achievement by people of the Meiji Era still plays an important role in the region.